K.H. Lee may have finished in a tie for 25th spot at the CJ Cup but at the same tournament he did also manage to top the golf world’s leaderboard in a category he had teased in interviews as being a career goal.

When Lee, who notched his first tour win earlier this year at the AT&T Byron Nelson, strode up to the Summit Club’s driving range, he did a double take when he noticed his hitting bay nameplate read: “Sexiest Golfer.” Taking the prank in stride, Lee laughed it off and then began to take his vest off pretending that a striptease was in order to go along with the acceptance of his new title.

The mock indecent exposure was an attention-grabbing moment for JDX whose logo, festooned on Lee’s reversible down vest and long sleeve polo underneath, received extra play. Speaking of opportune product placement, Lee was the impetus for affixing an enlarged JDX logo on tour players’ right glute. That cheeky decision likely played a role in propelling pants, shorts and skorts to the top of JDX’s sales leaderboard.

“What has done the best for us here in the U.S. has been our bottoms in both men’s and women’s,” Dwight Hansen, JDX America’s national sales manager, says.

“We have just the right mix of spandex and poly blend that doesn’t make you feel like you’re wearing a Sansabelt from the 1970s and 80s,” Hansen adds while also extolling the wrinkle-free properties of their proprietary lightweight performance fabric.

While the brand has done very little in the way of traditional advertising, JDX’s team of sponsored athletes led by Sungjae Im, the Jutanugarn sisters, and Charley Hull have accrued six wins in 2021. In addition to the top tier tours, JDX also have a strong presence on the KPGA and KLPGA. Growing that athlete roster to maximize exposure will continue to be a priority going forward. They recently signed up-and-comer Greta Voelker who played college golf at the University of Texas. 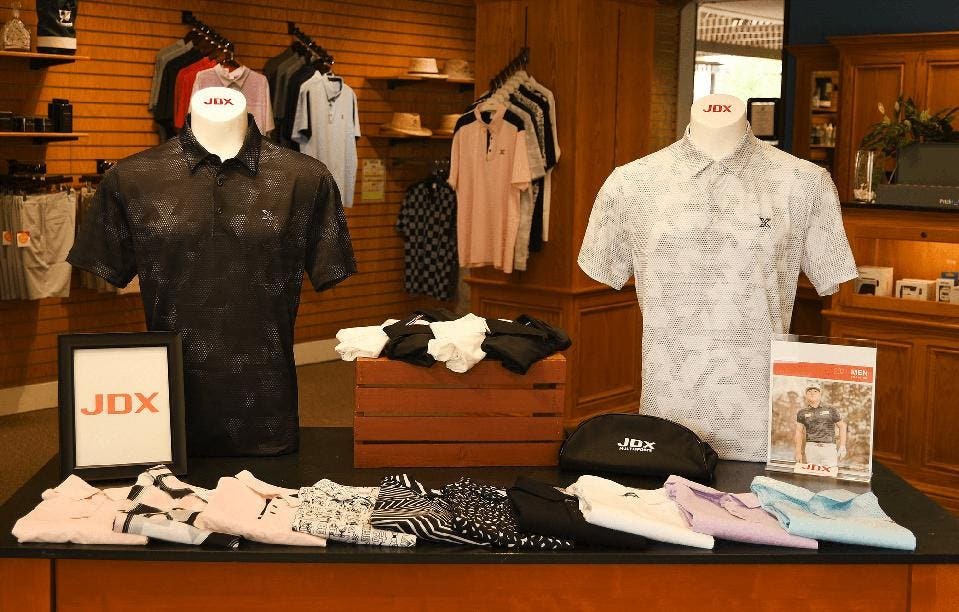 A display of JDX polos in a pro shop - JDX America

“At the CJ Cup we had more than one American player inquire about wearing our product in 2022,” Hansen says.

In Korea, JDX is a well-known brand with 370 clothing stores and posts around $150 million a year in sales volume but they’ve just gotten the ball rolling in the U.S. market. The brand launched stateside in 2020 and is currently distributed mainly in pro shops as well as select specialty retailers like Edwin Watts and Roger Dunn Golf Shops with 20% of their sales coming via direct-to-consumer purchases.

Currently around 450 stores in America carry JDX with on-course retail accounting for the vast majority. They project that figure to swell to over 1000 stores in 2022 coinciding with a tripling of the SKUs in their product line.

According to an Allied Market Research report, the global golf clothing market size was valued at $834.1 million in 2020 and is projected to grow at a 6% annual growth rate for the next decade.

“We believe that the golf apparel market will continue its rapid growth through 2030 and beyond due to a wide variety of fashionable and functional product categories being introduced into the marketplace in recent years. JDX is poised to be a global leader in this respect,” JDX America CEO Timothy Chae says.

“3-4% is a reasonable aspiration for JDX America,” Chae adds when asked about his company’s market penetration goal. 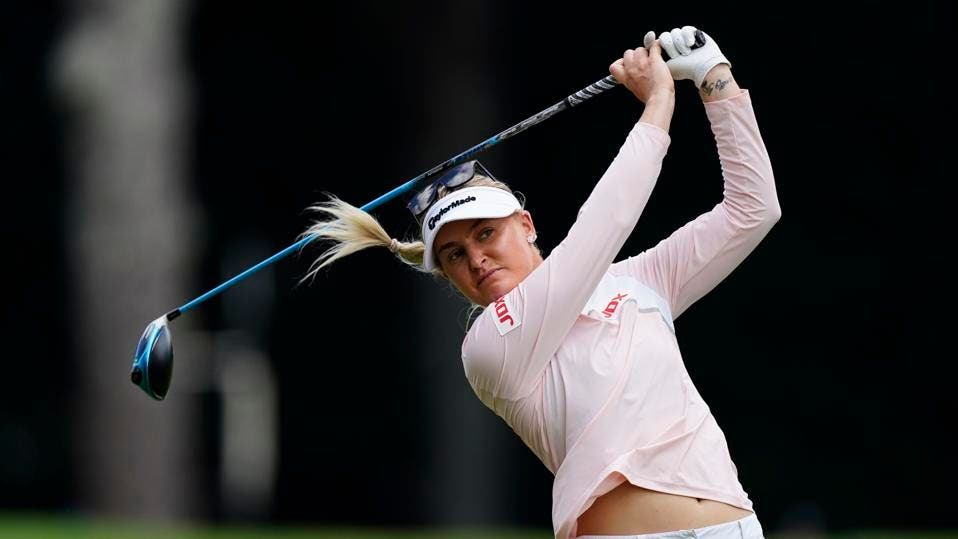 Charley Hull, of England, hits from the sixth tee during the third round of play in the KPMG Women's PGA Championship golf tournament Saturday, June 26,
2021, in Johns Creek, Ga. (AP Photo/John Bazemore)

America’s appetite for consuming Korean culture has never been higher. In addition to the enduring success of boy band BTS, the films Parasite and Minari scooped up Oscars in successive years and Netflix’s NFLX -0.5% ‘Squid Game’ is the most popular series in the streaming platform’s history. The climate certainly is favorable for a Korean golf fashion brand looking to gain share in the marketplace.

“We are seeing the beginning of what we really believe is a true taste for the culture. Now more than ever, whether it be in the arts or music like K-pop to clothing and food. Companies like Bibigo are making huge inroads here in the U.S. There has never been a better time,” Hansen says.

25% OFF YOUR FIRST ORDER

Sign up for our newsletter and receive updates on the latest from JDX, plus 25% off your entire first order!